I take it that this can be done only when at the gas station. I tried to do it at home, after watching this video, but the marker on the map shows the location of my home (of course), and I cannot seem to move the marker. The gas station in question is only a few blocks away, and it's the one I use most. It's particularly annoying, because Fuelio knows the place is there, but thinks it's only a store. In fact, the map shows the location of the gas pumps and of the office, which contains a small convenience store (like most gas stations do now). The office/store is named (with a shopping bag icon), while the structure where the pumps are is unidentified. Google Maps knows it's a gas station: https://goo.gl/3mnLe

Thank you! I've made that mistake in the past, always because of a typing error - but I think that Fuelio showed me an actual error message, which allowed me to correct the mistyped mileage and save the fillup entry.

Here is a screenshot before I start: 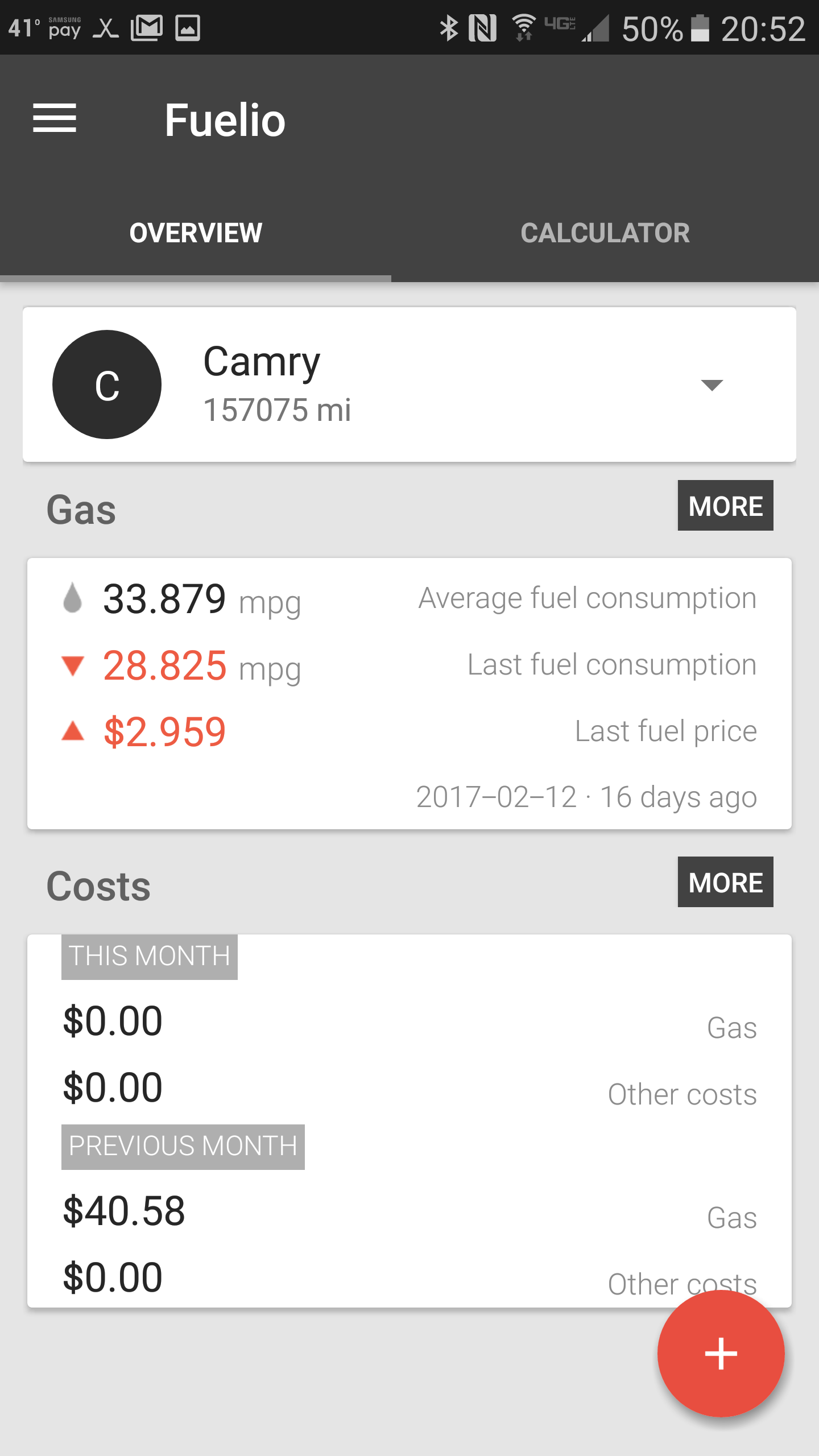 Here is a screenshot after I fill out the data for the fillup. (I left Gas Station and Note empty for simplicity.) After I press the white checkmark in the upper right corner NOTHING HAPPENS except the little animation I described that indicates that my touch was detected. Everything on screen REMAINS THE SAME! 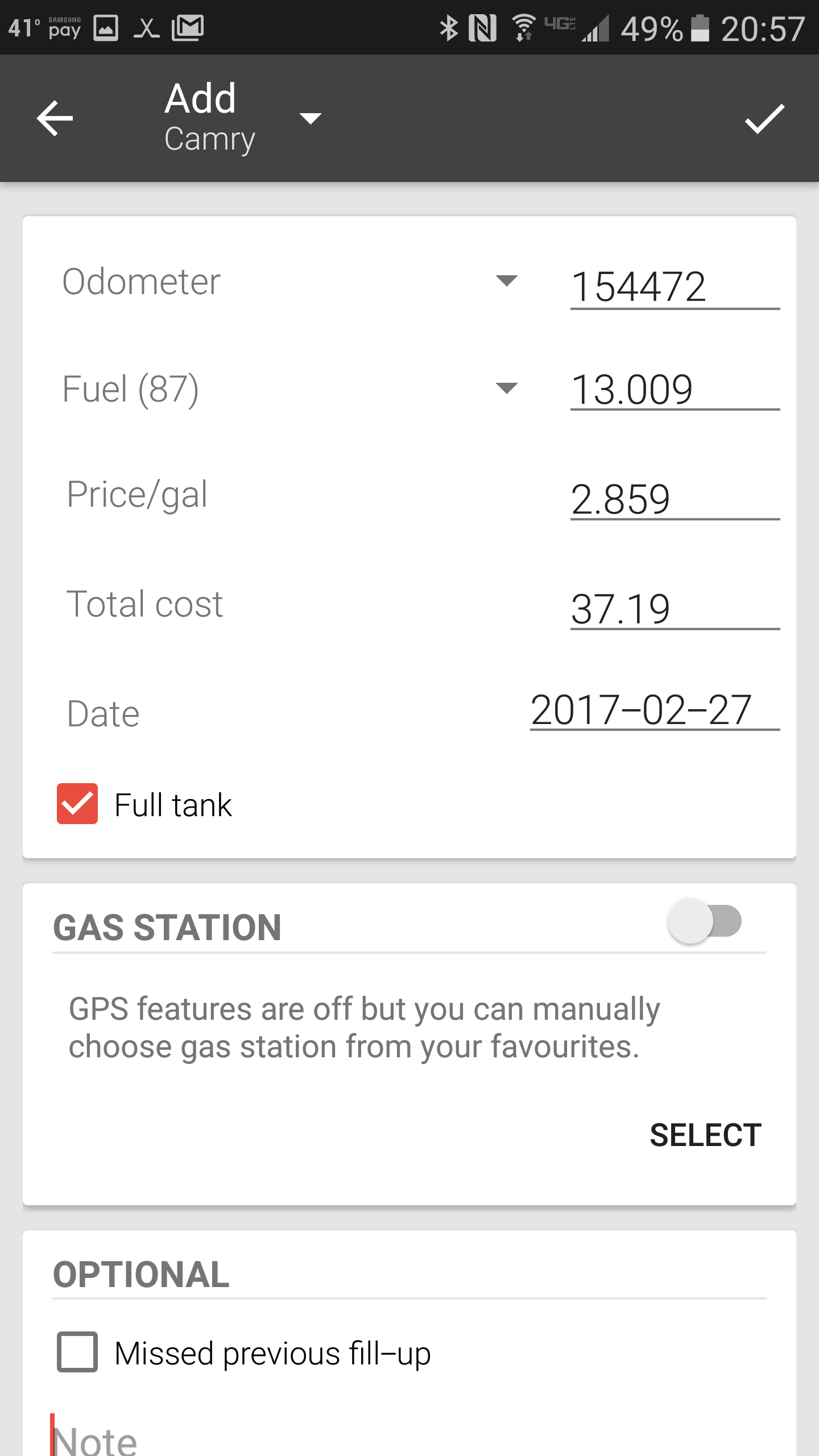 There are not many other choices from here.

If I press the checkmark, nothing happens (as I've described several times). The screen looks EXACTLY the same.

If I press the little down arrow next to "Add Camry" it just shows "Camry", because I have only one car.

If press the left arrow at the top left, it goes back to the Overview screen - and it is unchanged. To me it looks exactly the same as the first screenshot. 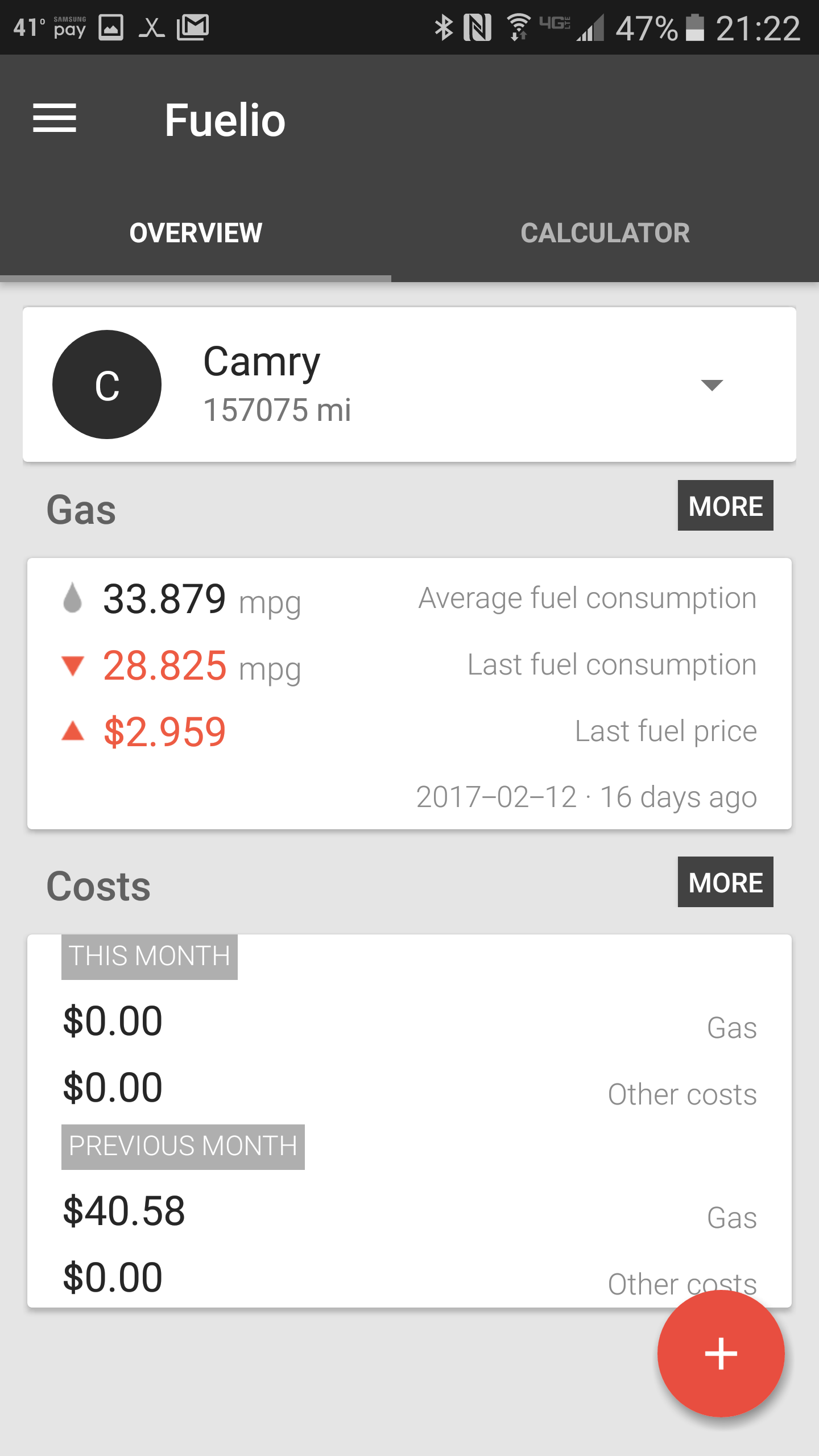 Second, about the CSV file: It is a backup, but it only went to 2016-05-23. That is, my last 9 months of data were not backed up. Apparently the autosync was turned off during an update or something. So I updated it.

1. How do I know if I have backup? I certainly have Fuelio set back up to Google Drive and Dropbox, but I do not know if it does. How do I find out? What do I look for? In my Google Drive, a search for "Fuelio" found a folder named "Fuelio" with two sub-folders, "sync" and "backup-csv".

2. When I tap the green check mark on the virtual keyboard after entering the data, the keyboard goes away, as expected. When I then press the white check mark on the black background in the top right corner, there is no error info that I can see. The only thing that happens is that a small disk of the black background immediately around the checkmark turns gray very briefly, with the graying appearing to move out from the checkmark. I take this to indicate that the tap has been felt by the phone. Nothing else happens. Everything on screen stays on screen. If I tap the check mark again, the result is exactly the same. If I tap the arrow back to the Overview, it shows the odometer reading and fuel price for my previous entry, two weeks ago. If I use the menu to select the Mileage log, it does not show the entry for yesterday: the last fillup shown is the one two weeks ago. At least 6 times I've entered the figures for yesterday's fillup. I've turned the gas stations off and on. I've added my note and left it off. No matter: when I click that checkmark, the result is always the same as I described above. HOW DO I GET THIS APP WORKING AGAIN? 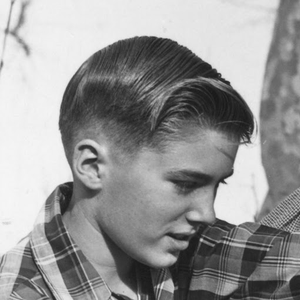